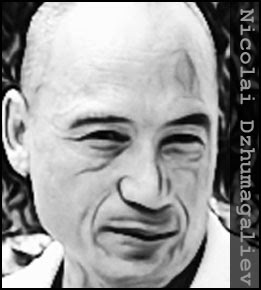 
Known as “Metal Fang” because of his unique dental work, Nikolai Dzhumagaliev was a Kazakhstani serial killer who preyed on prostitutes mainly in the town Alma-Ata, Kazakhastan. Like Yorkshire Ripper, Peter Sutcliffe, Dzhumagaliev was a mission-based killer who made it his goal to rid the world of prostitutes. His usual M.O.was to lure his victims to a local park for sex, then rape them and hack them to death with an axe.

He was also a cannibal, who would cut chunks of flesh from his victims. Some of this he’d consume himself, but he also enjoyed hosting dinner parties for friends and acquaintances. At these, he’d prepare traditional Kazakhstani dishes, heavy on the meat. His guests had no idea that they were consuming human flesh.

Dzhumagaliev was eventually caught when he invited two town drunks home for a meal and one of them discovered a woman’s severed head in the refrigerator.

At trial Dzhumagaliev was found not guilty by reason of insanity, He was committed to a Tashkent mental hospital but escaped in 1989 while being transported to another facility. He was re-captured in 1991 in Fergana.

Dzhumagaliev is currently confined at a mental institution. It is highly unlikely that he will ever be released.