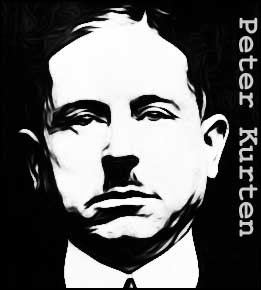 
Born into poverty, Peter Kurten suffered horrendous childhood abuse at the hands of his alcoholic father. It is no surprise therefore that he became an abuser himself, and started sexually abusing his younger sisters. He also began engaging in criminal activity from a young age and later claimed to have committed his first murders at age five, deliberately drowning two young friends while they were swimming in the Rhine.

After Kurten’s family moved to Dusseldorf in 1894 he fell under the influenced of a depraved dogcatcher, who introduced him to bestiality, animal torture and arson. Kurten soon graduated from there to attacks on people. He committed his first provable murder in 1913, strangling 10-year-old girl Christine Klein, during the course of a burglary. His crimes were then halted by an eight-year prison sentence.

After his release in 1921, he moved to Altenburg, where he married. In 1925 he returned to Dusseldorf and resumed his murderous career. On 8 February 1929, Kurten molested and murdered an eight-year-old girl. On 13 February he killed a middle-aged mechanic, stabbing him 20 times. Kurten then went to ground for several months, emerging again on August 21, stabbing three people in separate attacks. Two days later, he murdered two sisters, aged five and 14. The following day he carried out a frenzied knife attack on a woman.

With the city in a state of terror over the mysterious killer now known as the “Vampire of Dusseldorf,” Kurten beat a servant girl to death with a hammer in September, before attacking two more women the following month. In November he murdered a five-year-old girl stabbing her 36 times with a pair of scissors.

The hammer attacks continued through to March 1930, although the victims all survived. Then, in May, Kurten deviated from his M.O. raping a young woman named Maria Budlick but leaving her otherwise unharmed. Budlick was able to lead the police to Kurten's home. In custody, he confessed to 79 offenses, and was charged with nine murders and seven attempted murders.

Kurten was guillotined on July 2, 1931. Before his execution, he famously asked the executioner if he would be able to hear the blood spurt from his neck after his head was cut off. Told that he would, at least for a brief moment, Kurten is reported to have said: “Good, that would be the ultimate thrill.”