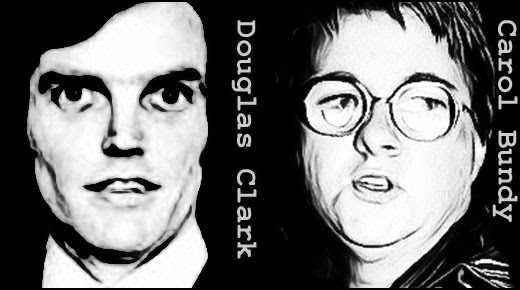 Doug Clark and Carol Bundy made an odd couple, he a part-time gigolo with a taste for underage girls, she a frumpy, overweight nurse, pining for a lost love. Still Bundy was just Clark’s type, a vulnerable woman with low self-esteem who he could easily manipulate.

The pair met at a country and western in January 1980, and things moved quickly from there. That same night Bundy took Clark back to her apartment and he never left. Soon he’d introduced her to his taste for kinky sex, including an ongoing relationship with an eleven-year-old girl who lived across the hall. Bundy made no complaint, not even when Clark started talking about murder and mutilation.

In the early hours of June 24, 24-year-old prostitute, Karen Jones, was found behind a Burbank restaurant, killed by a gunshot to the head. Later that morning, police were called to Studio City, where a headless female body had been discovered. She was identified as Exxie Wilson, 20, another prostitute. The missing head would later be found in a Hollywood alley. Clark had carried it from the scene to use as a sex toy.

With the LA newspapers publishing lurid headlines about the "Sunset Strip Slayer" another victim was discovered, this time near Sylmar, in the San Fernando Valley. And the murders continued on July 25, when the corpse of yet another young woman was found near Sunset Boulevard. Like the others, she’d been killed by a bullet to the head.

So far, all of the murders had been committed by Clark, although Bundy had accompanied him on at least one occasion. But on August 5, Bundy carried out a murder of her own, shooting and then severely mutilating her former lover, John Murray.

That murder would bring about the downfall of the deadly duo. Two days later, Bundy broke down at her job and confessed everything to co-workers. The police were called and both Clark and Bundy were soon under arrest. At trial, Clark tried to pin the blame on his female accomplice but it was to no avail. He was sentenced to death, she to life in prison

Carol Bundy died of a heart attack on December 9, 2003. Douglas Clark is still on death row.