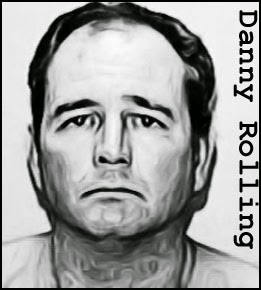 
Known as the Gainesville Ripper, Danny Rolling committed a serial of incredibly brutal murders in Florida during 1990. Five young victims were murdered in their apartments in three separate incidents, the killings marked by extreme overkill. One female victim was decapitated, others were skinned or had body parts removed, all of the corpses were posed at the scene.

The horrific series of murders began on August 24, 1990 when Rolling broke into the apartment of 17-year-old university freshmen Sonja Larson and Christina Powell. They were found mutilated and stabbed to death. Both women had been raped, one postmortem.

The following day, Rolling killed Christa Hoyt, an 18-year-old employee of the sheriff’s department. Her body was found propped up in bed. The killer had sliced off her nipples and ripped open her abdomen from her breasts to her pubic bone. He’d also cut off her head and perched on a shelf across the room.

Rolling remained at large until September 8, when he was arrested after a botched bank robbery in Ocala, Florida. He was later linked by DNA to three more killings in Shreveport, Louisiana, committed in 1989.

Tried for the Gainesville murders in 1992, Rolling pleaded guilty and was sentenced to death. He was executed by lethal injection on October 25, 2006.