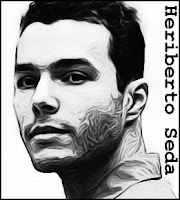 
A copycat of San Francisco’s notorious "Zodiac," Heriberto Seda, terrorized New York City with a killing spree that spanned 1990 to 1993 and left three dead and many others injured.

Seda, however, took the Zodiac monicker more literally than his infamous namesake. His plan was to kill twelve people, one for each astrological sign. When the NYPD received a letter from Seda threatening to do just that, they disregarded it as a hoax. On March 8, 1990, they were proved wrong.

Mario Orosco, a Scorpio, was shot in the back but survived. 21 days later, German Montenedro, a Gemini, also survived his encounter with Seda. The next victim, however, was not so lucky. Joseph Proce, a Taurus, was attacked and shot on May 31, 1990. A note found near his body read: "Zodiac -- Time to die!.” Proce died in the hospital three weeks later.

A fourth victim, Larry Parham, was shot and injured in Central Park on June 21 but thereafter the Zodiac disappeared until August 1992, when he again started corresponding with the police. Soon after, the attacks started up again. Patricia Fonte, a Leo, was killed in a vicious knife attack on August 10, suffering over 100 wounds.

About a year later, on June 4, 1993, Seda shot James Weber, a Libra, in the leg. Six weeks after that, he killed his third victim, a homeless man named John DiAcone, star sign Virgo. On October 2, he shot Diane Ballard, another Taurus, and left her partially paralyzed.

By now the story of the Zodiac Killer had leaked to the press and the city was in panic, fearing another “Son of Sam” type killing spree. But then police got a break in the case. Seda was involved in a domestic altercation with his sister and her boyfriend on June 18, 1996. The police were called and a stand-off ensued, during which Seda fired several times at officers. After he eventually surrendered, the police searched his home and found evidence that linked him to the Zodiac attacks.

Convicted of three murders, Heriberto Seda was sentenced to life in prison.