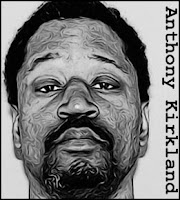 
A killer with an uncontrollable sex drive and a deep-seated hatred towards women, Anthony Kirkland preyed on young females in the Cincinnati area between 2006 and 2009, claiming four victims, three of them teenagers.

Kirkland had already served time for manslaughter by the time he started his killing spree in 2006. On May 20, 1987, he’d beat and choked his girlfriend Leola Douglas to death, thereafter dousing her body with lighter fluid and setting her on fire. Convicted on that charge, he served 16 years in prison before being paroled in 2004.

In the spring of 2006, the bodies of 15-year-old Casonya Crawford and Mary Jo Newton, 45, were found strangled to death and then partially burned in an apparent attempt to conceal evidence of sexual assault. Kirkland was suspected, but the police had no evidence against him. Seven months later, in December 2006 another partially burned corpse turned up, that of Kimya Rolinson, aged just 14. Again the police could not tie main suspect Anthony Kirkland to the crime.

In May 14, 2007, Kirkland was sent back to prison for 115 days after a standoff with a SWAT team at his home, during which he threatened to kill his 18-month-old son. Shortly after his release 13-year-old Esme Kenney went missing while jogging near her home. Her strangled and burned body was found in nearby woods and Kirkland was found fast asleep nearby, with Esme’s watch and iPod in his possession.

Kirkland would eventually be sentenced to death for Esme Kenny’s murder. He currently awaits execution.