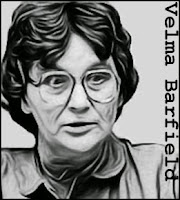 
Velma Barfield was a two time widow when she began dating farmer, Stuart Taylor, in 1977. She was also addicted to prescription painkillers, a habit she financed by committing petty thefts and forgery. It wasn’t long before she was forging checks on Taylor's account to pay for her addiction.

Taylor, however, soon discovered the fraud and threatened to report Velma to the police if she continued stealing his money. Fearful of being arrested, Velma decided that Taylor would have to go. She began stirring rat poison into his drinks. Within days, Taylor was racked with abdominal pain, afflicted by chronic vomiting and diarrhea. He died in hospital shortly after.

Unfortunately for Velma, Taylor’s family insisted on an autopsy, which in turn showed large amounts of arsenic in his system. Arrested for murder, Velma soon confessed, then stunned investigators by admitting that she’d also murdered her second husband, Jennings Barfield; her mother, Lillian Bullard; Dollie Edwards (a relative of Stewart Taylor); and John Henry Lee, who she’d worked for as a housekeeper. In each case the murders had been committed to cover up frauds and thefts.

At trial, the defense tried to have Barfield declared insane, but that was rejected by the jury. Found guilty of murder, Velma Barfield was sentenced to death. She was executed by lethal injection in North Carolina on November 2, 1984.