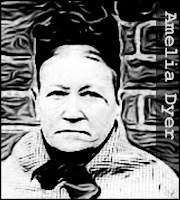 Amelia Dyer was Britain’s most prolific ‘baby farmer,’ a particularly evil woman who took in illegitimate children for a fee, murdered them, and then pocketed the money their mothers had paid for their care.

In 1895, Dyer set up shop in Reading, placed an ad in the local paper and was soon inundated with desperate young mothers, willing to pay for her services. It was not long before tiny bodies began showing up in the River Thames, all with a length of tape pulled tight around their necks.

Police attention focused in on Dyer after one of the babies was found wrapped in packaging that had an address sticker with her name on it. She was eventually arrested in April 1896 and despite her protestations of innocence, seven murdered babies were linked to her, all bearing clear signs of ligature strangulation. Realizing that the game was up, Dyer confessed, telling detectives, “You'll know mine by the tape around their necks.”

Convicted of murder at the Old Bailey in May 1896, Dyer was sentenced to death. She was hanged at Newgate Prison on June 10, 1896.