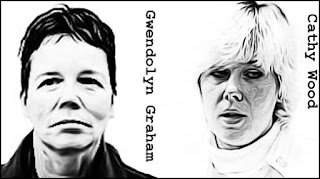 
Lesbian lovers Gwendolyn Graham and Catherine Wood were co-workers at the Alpine Manor Nursing Home in Walker, Michigan. Eager for a thrill to spice up their lovemaking, the dominant Graham suggested that they should murder the elderly patients under their care. When Wood agreed, it sparked a murder spree which would claim the lives of five elderly women, in the space of just three months between January and April 1987. The depraved pair would smother their helpless victims during the night shift, then make love in the same room as the corpse.

Because of the advanced ages of the victims, all of the deaths were originally deemed to be from natural causes. Graham and Wood might well have continued killing indefinitely had their relationship not fallen apart. Thereafter, Graham moved to Texas, where she found work at a pediatric hospital. Fearful that Graham might start killing children, Wood told her ex-husband about the Alpine Manor murders. He in turn went to the police.

Graham and Wood were arrested and charged with murder, with Wood agreeing to testify against her ex-lover. She said that it was Graham who had committed all of the murders, while she had only acted as a lookout.

Found guilty on all counts Gwendolyn Graham was sentenced to life without the possibility for parole. Cathy Wood received a sentence of 20 to 40 years.