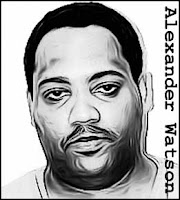 Alexander Watson was already serving a life sentence for stabbing a woman to death in Prince George County, Maryland when cold case investigators got a hit on the State’s DNA database linking him to three unsolved homicides.

The first of those dated back to October 1986, when 34-year-old Boontem Anderson was stabbed to death in her Fort Meade apartment. The mother-of-two had stayed home sick from work that day. Her 11-year-old son found her lying face down in the bathtub when he returned from school.

Some eighteen months later, on May 23, 1988 Elaine Shereika went for her usual early morning run before heading to work. She never returned. A farmer found her partially clothed body in a field the following day.

The third victim was 14-year-old Lisa Haenel, a ninth-grader at Old Mill High School. Lisa went missing on January 15, 1993. Her mother's boyfriend found her nude body the next morning, near the path she usually walked to school. Her case and the others had lain dormant until the DNA match. Now at last the police had a suspect.

And Alexander Watson was not about to argue with a positive DNA match. Faced with the possibility of a death sentence if found guilty, Watson confessed to the three murders. He was given three additional life terms, without parole, on August 16, 2007.