The lives and dreadful deeds of 22 Soviet Monsters, including; 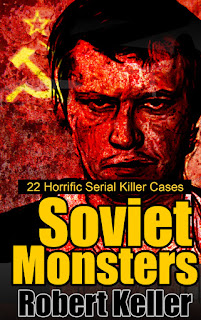 Nikolai Dzhumagaliev: known as “Metal Fang” due to his unique dental work, Dzhumagaliev served up the flesh of his victims to his unsuspecting dinner guests.

Mikhail Popkov: police officer with a deadly sideline in murder and necrophilia, Popov inflicted unbelievably horrific mutilations on his victims.

Tamara Samsonova: 68-year-old female serial killer who mutilated her victims and may well have cannibalized their corpses.

Anatoly Onoprienko: a killer so brutal, so bloodthirsty, that the Ukrainian government mobilized an entire army unit to stop him.

Tamara Ivanyutina: a particularly malevolent individual, Ivanyutina killed anyone who offended her in even the slightest way, sending them to an agonizing death with her vial of thallium.

Irina Gaidamachuk: known as “Satan in a Skirt,” Gaidamachuk bludgeoned 17 elderly women to death, robbing them for money to buy vodka.

Vladimir Bratislav: inflicted such horrific mutilations on his 30 victims that the police refused to release the details, even after he was convicted.

Alexander Spesivtsev: Siberian cannibal who preyed on street children, slaughtering them in his filthy apartment and handing over their flesh to his mother to cook.


Plus 12 more harrowing true crime cases. Click here to get your copy now.

Read more »
Posted by Robert Keller at 01:32 No comments: