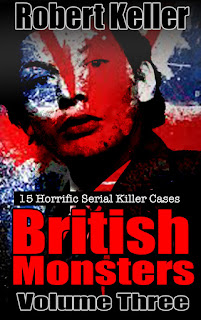 Peter Moore: A mommy’s boy who was obsessed with the character Jason Voorhees, from the Friday the 13th movies, Moore decided to launch a murder campaign of his own.

Phillip Smith: A hulking killer known as “Bigfoot,” Smith beat his petite female victims to death with his bare hands.

Colin Ireland: After developing a morbid interest in serial killers, Ireland made a New Year’s resolution to become one. Five men would die horrendous deaths to furnish his ambition.

Gordon Cummins: It was 1942 and London was suffering under the German bombardment known as the Blitz. Then a new threat emerged, a deadly psychopath known as the “Blackout Ripper.”

Catherine Wilson: This Victorian poisoner might well have gotten away with four murders, had she not decided to change her venom of choice – to sulphuric acid!

Stephen Griffiths: A PhD student with a taste for murder, Griffiths killed his victims with a crossbow, then ate their flesh.

John Bodkin Adams: Dr. Adams’ patients had a peculiar habit of dying of unexplained ailments, usually after bequeathing their possessions to him.

Levi Bellfield: The “Bus Stop Killer” prowled the streets of West London, hunting for lone women, who he bludgeoned to death with a hammer.


Plus 5 more shocking cases. Click here to get your copy now.

The Man In Black

“This business boils down to being a dominant gay, and it built up ever since Mummy died.” – Peter Moore 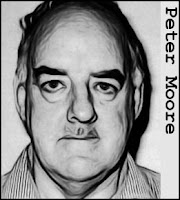 Just like Norman Bates in the iconic Hitchcock movie “Psycho,” Peter Moore was a mommy’s boy. Moore was born in St. Helen’s, Merseyside in 1940, when his mother was 40 and had all but given up on having children. She called him her “miracle baby” and doted on him from day one, insulating him from his alcoholic and somewhat distant father. This bond was strengthened further when the family moved to Wales and Peter started attending school. He was exceptionally tall for his age, but had slightly feminine mannerisms, making him an easy target for bullies. But at least when Peter came home crying because of their abuse, mother was there to comfort him.

Moore’s father ran an ironmongery business, and when he retired in 1970, he handed the business over to his son, who showed a certain flair for entrepreneurship. Still living at home, the adult Moore appeared to be the perfect son, attentive and caring. He seldom went out and, at 30, he still referred to his mother as “Mummy.” He was also popular with the neighbors, being always willing to take on odd jobs or to dog sit.

But unbeknownst to his parents and neighbors, Moore harbored a dark side. He was a dominant homosexual with a Nazi fixation and an obsession with the fictional character Jason Voorhees, from the Friday the 13th slasher movies. He also enjoyed prowling gay meeting places for sex partners and often ended up beating those partners into submission with a truncheon. In an era when few gay men were prepared to admit their homosexuality, most of these crimes went unreported.

In 1979, Moore’s father died. Shortly thereafter, Moore sold the ironmongery business to pursue other opportunities. These included delivering gas to caravan sites, and selling garden supplies and videos. Moore made a success of all of these enterprises. But what he really wanted was to own a movie theater. In 1991, the ardent movie fan got his wish. He would go on to open a chain of four cinemas. His mother, still blissfully unaware of his nocturnal activities, could not have been prouder.

Experts are divided as to what tipped Peter Moore over the edge from assault to murder, but most agree that his mother’s death in 1994 probably had something to do with it. Moore took the loss hard and to compound matters, three of his beloved pets died in quick succession thereafter. Whatever the cause, we know that in             September 1995, Moore purchased a combat knife, a gift to himself on the occasion of his 49th birthday. Then he began trawling his regular spots, dressed all in black, his trusty truncheon and his new combat knife stashed in his car.

The first man to die at Peter Moore’s hands was Henry Roberts, a 56-year-old retired railway worker who lived in a squalid cottage in Anglesey. Roberts kept very much to himself and was rumored by the locals to be gay. However, Moore did not pick him up at one of his usual haunts. Instead, Moore’s spotted the lights of Roberts’ isolated cottage while driving home late at night from one of his movie theaters. Having noted the spot he decided to pay a visit the following evening. Roberts was lured outside and then stabbed to death after which Moore’s pulled down the dead man’s trousers and inflicted additional stab wounds to his buttocks. He left having taken a large Nazi flag that Roberts had hanging on his wall.

Roberts had been a regular at his local pub, the Sportsman Inn, so when days went by without him putting in an appearance, one of the other patrons went to check on him. He found Roberts lying near an outhouse with his trousers around his ankles. The police pathologist would later count 27 knife wounds to the body.

The murder had stirred something in Peter Moore, something that he found immensely satisfying. It wasn’t long before he felt the urge to kill again. Three weeks after his first kill, Moore headed north to Liverpool where he picked up 28-year-old Edward Carthy in a gay bar. Carthy was a drug addict and alcoholic who had been deeply depressed since the suicide of his lover, weeks earlier. It did not take much for Moore to persuade him into his van. They began driving towards Wales but Carthy must have had some inkling of Moore’s intention because he started to panic and began demanding to be let out. Moore eventually pulled over at a desolate spot in the Clocaenog Forest, where he stabbed Carthy to death. The body was concealed in the woods and the murder went totally unnoticed until Moore confessed to it after his arrest.

On November 30, 1995, Peter Moore’s struck again. Unlike the first two victims 49-year-old Keith Randles wasn’t gay. He was a manager of a security firm who had been employed to guard roadworks along a stretch of the A5 in Anglesey. The company had a caravan on the site, to be used as an office, and it was inside this temporary workplace that Randles was attacked. The police at first assumed that the killing was random, perhaps committed by an irate motorist. On the night of the murder, Randles had phoned his daughter from the site office saying that he was about to leave for home. Minutes later he was dead, felled by 12 brutal stab wounds inflicted by Moore’s combat knife. Moore would later admit that Randles had begged for his life and asked why Moore was attacking him. “Because it’s fun,” Moore had replied.

And still Peter Moore’s lust for blood wasn’t sated. In December 1995, he drove to Pensarn Beach, a well-known gay pick-up spot. Moore scanned the beach and spotted 35-year-old Anthony Davis standing at the water’s edge, exposing himself. He walked up to Davis and attacked without saying a word. Davis was stabbed six times during a brief and bloody struggle. But Moore was also cut during the tussle, leaving blood droplets at the scene, a clue that would later give police the evidence they needed to make their case.

Anthony Davis had been a secret homosexual, an apparently happily married father of two children, who nonetheless regularly picked up male sex partners at Pensarn. His murder threw the gay community in North Wales into uproar. Not long after it was reported, the editor of a local gay publication approached police and persuaded them to set up a confidential tip line. The authorities were less than enthused by the idea but as it turned out, the hotline provided an almost immediate dividend. Several gay men phoned in to complain about being beaten up by an assailant dressed all in black. One of the victims went a step further, telling police that he’d been taken to a house where he was tied up and tortured. He was able to provide an address and also the name of his attacker – Peter Moore.

Moore was at home when the police called on him on December 12, 1995. And the officers involved were soon convinced that they had the wrong man. The alleged murderer was a respectable businessman who was calm and cooperative and denied any involvement in the killings. It was only after they searched Moore’s house that doubts started to surface. A quick scan of the premises turned up handcuffs, studded belts, a wooden truncheon, rubber gags, vibrators, and the black leather trousers that the attacker was alleged to wear. There was also a large Nazi flag, just like the one taken from victim Henry Roberts’ house. Moore was therefore arrested and taken down to the station for questioning.

Over the days that followed, Peter Moore was subjected to over 14 hours of intense interrogation. During most of this time, he continued to assert his innocence but eventually he began dropping hints that perhaps he was a serial killer after all. Then, after a detective asserted for the umpteenth time the belief that Moore was responsible for three murders, Moore corrected him, stating that the correct toll was in fact four. He then confessed to killing Edward Carthy, a murder the police were not even aware of.

Peter Moore went on trial at Mold Crown Court on November 11, 1996. In spite of his confession, he entered a plea of not guilty, thus forcing the families of his victims to listen to the horrific details of their murders. Not that Moore was admitting culpability. He now blamed the murders on an accomplice, a gay lover who he refused to name. It was fanciful at best, especially as the police had Moore’s DNA, taken from the blood found at the Davis crime scene.

On November 29, after deliberating for just two and a half hours, the jury delivered a verdict of guilty on all charges. The judge then sentenced Moore to four life terms, something he accepted with a sheepish grin. Asked whether he had any remorse for his actions, Moore simply said: “This business boils down to being a dominant gay, and it built up ever since Mummy died.”

Don’t have a Kindle? No problem. Download Amazon’s free Kindle reader here for PC or Mac
Posted by Robert Keller at 23:59