The shocking true account of one of the most sickening murders in the annals of American crime. 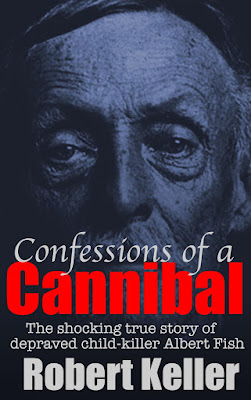 On a drab, humid day in June 1928, a frail looking old man called at the Manhattan apartment of Albert and Delia Budd and persuaded them to allow their ten-year-old daughter to accompany him to a children’s party.

What followed was one of the most sensational murder cases in American history, a crime that shocked, disgusted and enthralled an entire nation.

Follow the paths of a horrendously depraved killer and the relentless detective who dedicated six years of his life to tracking him down.

Get inside the courtroom for one of the trials of the century. Revisit the crime scenes and hear from the psychiatrists who examined this human monster. And finally, read the barely believable confessions of one of the most perverted individuals ever to walk this earth.


WARNING: Confessions Of A Cannibal will shock you to the core.
This no holds barred account is not for the fainthearted.

Monday, July 14, 1924 was a hot summer’s day in Staten Island. In the Port Richmond area of the borough, Anna McDonnell, wife of a New York City police officer, sat on the porch of her house enjoying the early afternoon sunshine with her children, eight-year-old Francis, Albert, 5, and Annabelle, just one-month-old and sleeping contentedly against her mother’s breast. Staten Island in those days was a fairly isolated place, and the street where the McDonnell family lived, particularly so. Strangers stood out, so when the old man shuffled into view Mrs. McDonnell immediately noticed him.

He was a peculiar sight, slight of build and perhaps five and a half feet tall. His clothes were shabby, one step removed from those of a vagrant. His gray moustache was unkempt and there was a weekend’s worth of gray stubble on his jowls. When he raised his hat in salutation Mrs. McDonnell noticed that his gray hair was greasy and unkempt. The man appeared to be muttering to himself, clenching and unclenching his hands in an odd nervy gesture. Moments later he had shuffled past, heading (Mrs. McDonnell assumed) for the nearby Charlton’s Woods. She forgot about him the moment he was out of sight.

A couple of hours later, after Mrs. McDonnell had gone inside to feed the baby, Francis and his younger brother Albert were playing with some neighborhood boys at the edge of the woods. The boys were tossing a ball between them when the old man suddenly reappeared at the edge of the tree line. For a short while, he stood watching the children, his gaze darting nervously from one to the other. Eventually, his attention zoomed in on Francis and when the boy made eye contact he crooked a finger, beckoning him. As the other children continued their game, Francis walked hesitantly over.

The time was 4:30 p.m. Standing on his porch abutting the woods, a man named George Stern watched Francis and the old man in conversation. Then Francis turned and walked into the woods with the old man close behind. Just before they disappeared from view, the oldster cast a furtive look over his shoulder. Then both he and the boy were gone.

In the modern era, any adult watching this scenario play out would immediately have been suspicious. But this was the 1920s, a more innocent, more trusting time. Stern took no action, assuming, as he’d later testify, that Francis must have known the man to follow him so willingly. It would prove to be a fatal miscalculation.

When Albert McDonnell arrived home, he made no mention of his brother’s whereabouts and his mother didn’t think to question him. It was only when suppertime arrived and Francis had still not appeared, that Mrs. McDonnell asked about Francis and it was only then that Albert told her about the gray-haired old man. Arthur McDonnell had by then arrived home. Still dressed in his police uniform, he immediately went looking for his son. When that search proved fruitless, McDonnell made a call to his colleagues at the local precinct. Soon a massive search had been launched, with police and civilian volunteers scouring the neighborhood for the missing boy, working through the night without success. It would be a trio of Boy Scout volunteers who found Francis the following morning.

The body lay a few hundred yards into the woods, inadequately concealed under a pile of leaves and broken branches. Francis had been severely beaten and then strangled to death with his own suspenders, which had been pulled so tightly around his throat that they’d cut into his flesh and drawn blood. The boy’s shorts and underwear had been violently ripped from his body, leaving him naked from the waist down. This strongly suggested a sexual motive for the crime, something that was later hinted at in the New York dailies but never officially confirmed.

For now though, a feeling of outrage permeated the borough, particularly its policemen, who had seen the son of a brother officer violated and brutally slain. Within hours, fifty officers where at the scene, including the Chief of Detectives and the head of the homicide squad. By the following day, 250 plainclothes officers had been assigned to the case. Albert McDonnell, who was attached to a Manhattan precinct, was transferred temporarily to Staten Island, to participate in the hunt for his son’s killer. Meanwhile, officers were posted near the crime scene to prevent curious onlookers from trampling through the woods and destroying potential evidence.

The investigation soon took on the form of police enquiries the world over, before and since. Detectives and uniformed officers went door-to-door asking questions; potential suspects were brought in and given the third degree; a grid search was carried out in the woods looking for clues. An appeal also went out to the public for information and it wasn’t long before leads began pouring in, all of them useless. It seemed that every child and young woman on Staten Island had recently had a close encounter with a potentially murderous, gray-haired vagrant. Far-fetched as most of these stories were, the police had to check out every one of them.

The autopsy had in the interim revealed the full extent of the beating Francis had suffered prior to death. This cast doubt on the killer being the frail old man that Mrs. McDonnell had seen. How could someone that infirm have carried out such a vicious assault? Perhaps he’d had a younger accomplice, detectives speculated. There was certainly no shortage of suspects.

For a time, two orderlies at the nearby Sea View Hospital headed the suspect list, then it was an escapee from a New Jersey insane asylum, then a group of vagrants said to frequent an area of Charlton’s Woods known as Rattlesnake Nest, then a truck driver with a prior conviction for “impairing the morals of a minor.” There were incidents of mob justice too. A man named John Eskowski, found squatting in the woods, was chased down by an angry mob. He shot himself rather than enduring a lynching at the mob’s hands. It was later determined that Eskowski had been nowhere near Staten Island at the time of the murder.

Ultimately however, despite the very best efforts of the police, the case ground to a standstill. Francis McDonnell was buried at St. Mary’s church on Staten Island and it seemed to all that his killer would escape justice. The gray man had appeared out of nowhere to commit his atrocity. Now he was nowhere to be found.

Don’t have a Kindle? No problem. Download Amazon’s free Kindle reader here for PC or Mac
Posted by Robert Keller at 22:09