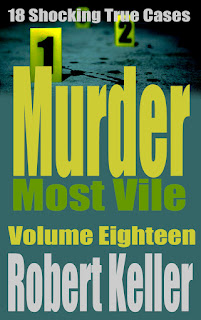 Flesh and Blood: How far would someone go to maintain their standard of living? As far as murdering their children to relieve themselves of the financial burden?

Death Metal: The band’s lyrics were peppered with references to Satanic sacrifice. For one of its members, that would prove to be a revelation of his own bloody end.

Kill Him by Christmas: The would-be hitmen had been given strict instructions by the boy’s stepmother. “Kill him by Christmas so I don’t have to buy a present.”

Music and Murder: The little girl was a prodigy on the accordion and her teacher promised that she could make her a star. But should anyone really have to die for their art?

Murder, Miami Style: After living the high life in Florida, Joyce wasn’t about to walk away from her marriage a broke divorcee. Wealthy widow was more her style.

Warning! May Cause Death: Would you swallow a vitamin pill that you received anonymously in the mail? John Kmetz did. To him detriment.

Bus Ride to Hell: When passengers aboard a Greyhound bus are awakened by the screams of one of their fellow travelers, they have no idea of the horror that is about to unfold.