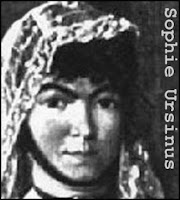 
Born into a wealthy family, Sophie Ursinus was married off at 19 to the elderly privy councilor of Berlin. She soon embarked on a steamy affair with and army officer named Rogay, apparently with the tacit approval of her husband. However, the relationship came to an abrupt end when the previously robust Rogay suddenly became ill and died, right after he told Sophie he was leaving her for another woman.

Sophie's husband was the next to go. He died on September 11, 1800, apparently from consumption. Then Sophie's wealthy aunt Christina Witte perished on January 23, 1801, leaving her a considerable fortune.

Although the authorities suspected nothing untoward in the deaths, all three had been poisoned by Ursinus. And she'd been less that discreet in her activities. One of her servants, a man named Klein knew about the murders. Fearing that he might give her up, Ursinus began dosing him with arsenic. He, however, recognized the symptoms and went to the authorities.

Ursinus was arrested and charged with murder.  Convicted of killing her aunt, she was sentenced to life imprisonment. But this was hardly a hardship. Transported to the prison at Glatz, she was given a suite of rooms complete with lavish furnishings and servants. She lived their in luxury until her death on April 4, 1836.