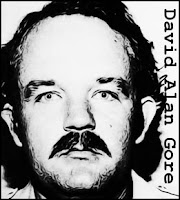 
David Alan Gore began his descent towards serial murder when his cousin, Fred Waterfield, offered him $1000 for every pretty woman he could abduct for Fred to rape. Gore quickly got to work, using his position as an auxiliary sheriff's deputy to coax or force his victims into compliance.

The first women to fall victim to this vile pair were 48-year-old Hisang Huang Ling and her 17-year-old daughter Ying Hua Ling. Both were raped and then strangled and buried in shallow graves.

Next Waterfield demanded a blonde and Gore obliged by kidnapping Judith Daley, after he found her beside her broken down car. Daley was raped and strangled, her body dumped in a swamp. Fourteen year olds Angelica Lavallee and Barbara Ann Byer were next, picked up while hitchhiking and later raped and killed.

The murder spree was only ended after 17-year-old Lynn Elliott escaped from Gore’s house and ran naked down the street. Gore, also naked, followed firing a gun and hitting Elliot. He then dragged the body back to his house and hid it in the trunk of his car. Neighbors had however called the police and Gore was arrested. Inside the house officers found another captive, a terrified 14-year-old.

Gore was eventually convicted of the murder of Lynn Elliot and sentenced to death. He was executed by lethal injection on April 12, 2012. Fred Waterfield received two life sentences for his part in the murders.