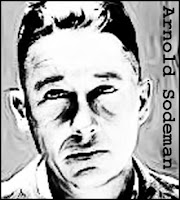 
In November 1930, a group of girls was playing in a Melbourne park when they were approached by a stranger. The man, 30-year-old Arnold Sodeman, gave them money to buy candy but asked one of the girls, 12-year-old Mena Griffiths to accompany him to a nearby house to perform a chore. Once there, he raped and strangled her, leaving her naked body at the scene.

Two months later Sodeman killed again. Hazel Wilson, 16, was on her way to a dance when he struck up a conversation with her. He then attacked and dragged her into a vacant lock-up, where he raped and murdered her.

The crime was very similar to the Griffiths murder and the police were certain that the same man was responsible. Fearful of arrest, Sodeman moved to Inverloch, 70 miles away. There, on New Year’s Day 1935, he committed another murder, luring 12-year-old Ethel Belshaw from a crowded beach, raping and killing her.

Eleven months later, Sodeman was working as a road digger near Dumbalk when he spotted six-year-old Jane Rushmer. The girl knew Sodeman so she willingly accepted a ride on his bicycle. Her violated body was found in nearby bushes later that day.

This time however, the police had a lead. Jane had been seen riding on a bicycle with a man and as Sodeman was known to cycle to work he was brought in for questioning. He quickly confessed to all four crimes.