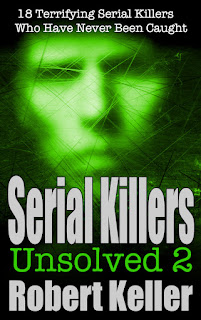 The Alphabet Murders: Three savage murders, one intriguing clue. This was a killer with a penchant for wordplay.

The Oakland County Child Killer: There’s a killer on the loose, targeting the most innocent of victims. In Oakland County, no child is safe.

The Vending Machine Killer: Stopping for a cold soda on a hot day should never get you killed. In this case, it just might.

The Thames Torso Murders: In the shadow of the Ripper, another killer stalks the streets of London, just as depraved and twice as lethal.

The Atlanta Lover's Lane Killer: Three young couples are attacked in their cars by a gun-wielding maniac. Making out just got deadly.

The Butcher of Mons: Plastic bags start showing up around the city of Mons. What they contain is the handiwork of a madman.

The Colonial Parkway Killer: It is scenic stretch of highway, dotted with historic sites. It also has a more nefarious claim to fame.

The West Mesa Bone Collector: The missing person cases had drawn little attention from the authorities. Then a mass grave was discovered.

It was a sight that horrified commuters making their daily drive out of Rochester, New York. In the dim, evening light of November 16, 1971, a young, dark-haired girl, not yet a teenager, was running down the breakdown lane of the 1-490 westbound, near the Chili-Riga exit. Shockingly, the child was naked from the waist down. She was frantically waving her arms, trying to get someone to stop for her. Then a vehicle pulled over and backed toward her and a man got out. The little girl cowered in fear as he grabbed her by the wrist and dragged her back to the car. Moments later, they had blended back into traffic and were racing away from the scene.

The little girl involved in this terrifying incident was named Carmen Colon. She was ten years old and a native of Puerto Rico who had moved to Rochester with her family.  Earlier that day, Carmen had set off to pick up a prescription for her mother at a drugstore close to her home. Witnesses would later report her getting into a car with a man who she appeared to know. She was not seen again until her body was found three days later, lying by the side of the road near Churchville. Carmen had been raped and strangled. The last hours of her short life had been filled with terror.

For homicide investigators picking up the strands of this terrible case, one thing seemed obvious. Carmen had known her abductor. Why else would she have gotten into a car with him? That narrowed the suspect pool considerably and detectives soon homed in on one man, the little girl’s uncle, Miguel Colon. Brought in for questioning, Miguel vehemently denied any involvement. He was then asked to take a polygraph and passed. Released from police custody, he promptly boarded a flight back to his native Puerto Rico. That should have rekindled suspicions, but the Rochester police took no further action. They believed that they’d eliminated Colon as a suspect. They may have been right. He wasn’t even in the country when the next little girl was killed.

Wanda Walkowicz was just eleven years old, a freckle-faced little girl, much loved by all who knew her. At around 5:10 p.m. on the evening of April 2, 1973, Wanda walked the few blocks to a local store to pick up some groceries for her mom. She never returned. By 8 p.m., with all other avenues exhausted, a frantic Joyce Walkowicz called the police and reported her daughter missing. Just over 14 hours later, came the news that every parent dreads. Wanda had been found, strangled to death at a rest area in Webster.

The brutal slaying of another child, just 15 months after the first, sent shockwaves through the community. It also left investigators with a puzzle to solve. Were the murders connected? The initial consensus was no. There were too many discrepancies. Both girls had been raped but Carmen was naked when she was found, and Wanda was fully clothed; both had been strangled but Carmen’s killer had been facing her, and Wanda was choked from behind. Any criminal profiler will tell you that this is a significant pointer to the psychology of the offender. Few stranglers kill their victims in both ways.

But for all the discrepancies between the two crimes, there was one oddity that could not be ignored. Both of the victims had alliterative names – Carmen Colon / Wanda Walkowitz – and both had been found in towns that matched their initials – Carmen in Churchville, Wanda in Webster. Most likely, this was coincidence. But what if it wasn’t? What if this was some bizarre signature that was somehow important to the killer?

That, however, was something for a psychologist to mull over. Detectives prefer to concern themselves with workable leads and there were plenty of those to keep them busy. Tips had been streaming in from the public. One tipster reported that Wanda had been forced into a Dodge Dart. Another reckoned that it had been a Ford LTD, and the driver had enticed rather than coerced her. A tearful Wanda had also been spotted in a green Pinto, with a tattooed man at the wheel. All of these leads had to be checked out but none of them went anywhere.

More promising was a tip-off about an ex-con, a man who had previously been arrested for child endangerment. This individual was hauled in and subjected to a fierce grilling, lasting over twelve hours. But he refused to buckle and eventually insisted on clearing his name via a polygraph. He passed. The police were back to square one.

Seven months passed with little progress in the investigation. Then, on November 26, 1973, another child was missing. Michelle Maenza, an 11-year-old with learning disabilities, disappeared on her walk home from school. A search was immediately launched but it would not have the outcome that everyone was praying for. Michelle was found in Macedon, New York, two days later. She was fully clothed, but an autopsy would determine that she had been raped. She’d also been strangled with a ligature, in a way that was identical to Wanda Walkowicz. The police could not help noticing, too, the alphabetic pattern that had become a feature of this series of murders.

Again, there were plenty of tip-offs and again they led nowhere. One tipster described an encounter with the driver of a beige vehicle along Route 350. The man appeared to have broken down, but he became angry when the tipster stopped and offered his help. He also seemed determined to cover up his license plate. A man matching that general description and driving a similar vehicle was later seen at a fast-food restaurant, buying a cheeseburger for a little girl who appeared to be crying. This was significant since the contents of Michelle’s stomach revealed that she’d eaten just such a meal shortly before she died.

With nowhere else to go with the inquiry, detectives worked this lead hard and eventually tracked the beige car to a petty criminal living in Lyons, New York. The man was brought in for questioning but offered up an alibi, saying that he’d been out job hunting all day. This was far from solid but was backed up by his family. He also agreed to a polygraph. Like the suspects before him, he passed. His elimination from the suspect list would mark the end of the forward momentum in the investigation. The leads quickly dried up after that and the case eventually went cold. Mercifully, there were no more dead little girls, but the Alphabet Murders remain unsolved to this day.

But that is not to say that there are no theories, no suspects, no clues as to the perpetrator of these horrific crimes. Before we consider those, we need to answer a fundamental question. Were all three girls killed by the same man? The consensus among those involved in the case is that they were not. Most investigators believe that the same person was responsible for the deaths of Wanda and Michelle, but that Carmen was killed by someone else, probably someone she knew. The most likely suspect (despite his polygraph result) is Miguel Colon, the dead girl’s uncle. Unfortunately, Miguel can no longer be pressed on the matter. He took his own life during a domestic dispute back in his native Puerto Rico.

As for the other two murders, there are three suspects who commonly enter the conversation. The first of those is a Rochester firefighter named Dennis Termini, who shot himself in a standoff with police just weeks after Michelle Maenza was killed. At the time, Termini was holding a hostage, a teenage girl who he had just abducted. Subsequent inquiries would link him to a series of brutal rapes in the area and confirm that he was the elusive serial offender known as the “Garage Rapist.” The only problem with Termini as an “Alphabet” suspect is that he targeted women in the 18 to 21 age group. That makes him an unlikely killer of pre-teen girls. Any lingering doubts as to his culpability were eliminated in 2007, when he was cleared by DNA.

The second suspect in the case is one of America’s most notorious serial killers. Kenneth Bianchi was half of the infamous killing team known as the Hillside Stranglers. Along with his cousin, Angelo Buono, he terrorized Los Angeles in the late 70s, subjecting ten women to terrible deaths. But before Bianchi moved out to the West Coast, he was a native of Rochester. He was living in the area during the Alphabet Murders, working variously as an ice cream vendor, a security guard, and an ambulance driver. Forensic evidence from the Walkowitz crime scene puts Bianchi within the 20% of males who could have committed the crime.

But Bianchi has consistently denied involvement in the crimes and a wrist print lifted from one of the scenes does not match him. Then again, such prints are far from reliable. They also change over time, as the skin loses elasticity. Despite his denials, we can’t rule out Ken Bianchi. We can’t conclusively link him to the murders either.

Which brings us to the third of our potential suspects, another serial killer who once called Rochester home and was living there at the time of the Alphabet Murders. Joseph Naso was 77 years old when he was arrested for a series of murders in California. What is striking about his case is that the women he was accused of killing all had alliterative names, just like those in the Rochester murders. One of them was even named Carmen Colon.

But again, there are some jarring differences, especially as regards victim profile. None of Naso’s victims were children. The California Alphabet Killer preferred prostitutes. He was ultimately convicted and sent to death row for six murders. His DNA was subsequently compared to that from the Rochester crime scenes. It did not match. The Rochester murders remained unsolved.