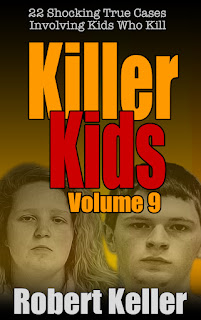 Nicholas Browning: He was the golden boy of the family, who excelled at everything he did…even murder.

Eliza Wasni: An Uber driver is savagely stabbed and slashed to death. His killer? A teenaged girl with anger issues.

Armadeep Sada: He is the world’s youngest known serial killer. You won’t believe how young.

Tasmiyah & Jasmiyah Whitehead: A battle of wills between a mother and her twin daughters turns deadly in this tragic tale of familial discord.

Anton Woode: Three big city hunters encounter a 10-year-old in the Colorado wilderness. Someone ends up dead… and it isn’t the kid.

Roger Dale Strunk: A six-year-old child is abducted from her backyard, taken by a teenager who has long harbored lustful thoughts about her.

Hannah Ocuish: A tragic tale from a dark past. Hannah Ocuish was just twelve years old when she went to the gallows for murder.

Darwin Bagshaw: A teenaged girl is beaten to death and tossed into a river. The chief suspect is her 14-year-old boyfriend. 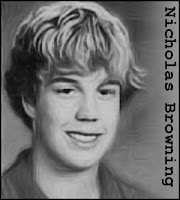 Their neighbors called them an all-American family and the Brownings, of Cockeysville, Maryland, certainly seemed to meet those criteria. Patriarch John Browning was a real estate lawyer at Royston, Mueller, McLean & Reid, Baltimore County’s oldest law firm. His wife, Tamara, was a homemaker who also served as PTA president at her son’s school. Then there were the boys, Nick, 15, Gregory, 13, and Benjamin, 11. They all did well at school and attended Boy Scouts, where their father was the scoutmaster. The family enjoyed the great outdoors and took regular camping trips. They had a comfortable home in the suburbs. They were regular attendees at Timonium United Methodist Church. It doesn’t get more all-American than that.

But perhaps the jewel in the Browning crown was oldest son, Nick. By 1991, Nick Browning had grown into a gangly teen with handsome, boyish looks. He was an honor student at Dulaney High and was on the golf and lacrosse teams. He played the cello in the school orchestra. He was looking forward to qualifying as an Eagle Scout and had recently built a prayer garden at his church as part of the criteria. Nick also had a wicked sense of humor and was considered the class clown of his sophomore year. That, at least, was the good side of Nick Browning. There was a dark side, too.

The truth is that Browning was a bully who liked picking on smaller kids and enjoyed taunting minorities and those with disabilities. One of his regular victims was his brother Greg who he often humiliated in public. Any effort by Greg to stand up for himself would earn him a beating. This, in turn, led to clashes between Nick and his parents. John and Tamara were not going to tolerate bullying. Not in their house. By late 1991, the harmonious home they’d tried to build was frequently the scene of angry confrontations.

And then, things took a decidedly darker turn. Nick started musing to his buddies on the school bus that he was thinking of killing his parents. “My dad’s rich and I want some of that money,” he told them. He also complained that his father was always shouting at him and that his mom was a ditzy blonde who wasn’t very bright. No one took any of these proclamations seriously. This was just Nick being Nick. His sense of humor often had a dark edge to it.

On the evening of Friday, February 1, 2008, just a week shy of his sixteenth birthday, Nick Browning was hanging out at a friend’s house. He’d spent a good part of the evening talking about some “dumb camping trip” that his family was undertaking to western Maryland and complaining that his father expected him to go with them. Then, at around 9 p.m., he abruptly got up and left, offering no explanation. He returned well after midnight, asking if he could sleep over. His parents had given him permission, he said. Given Nick’s earlier complaints and knowing that Nick’s parents were quite strict, the friend found this unusual. Nonetheless, he said yes, and Browning stayed the night and most of the next day. He was going to wait his parents out, he said, and return home after they’d left on their trip. In fact, he was going to throw a party that night to celebrate his upcoming birthday. He would spend a good portion of that afternoon on the phone to friends, inviting them over. Just before five, he asked for a ride home.

Unfortunately for Nick, it appeared that his impromptu party plans had been scuppered. As the car pulled up outside the handsome, farm-style bungalow, he saw that his father’s trailer was still standing in the drive. John Browning had recently bought the tow-along specifically for camping trips. It appeared that the family had decided to cancel this one. Telling his friends to stay in the car, Nick went inside, to check if “the coast was clear.” He returned a short while later to calmly inform the waiting teenagers that his dad was dead. He then re-entered the house and called 911, telling the dispatcher that his father might have suffered a heart attack.

The officers who responded to the call fully expected to find the victim of a cardiac arrest. What they found instead was a bloodbath. Forty-five-year-old John W. Browning lay on the couch in the living room, dead from a bullet to the head. His wife Tamara was upstairs in bed, also deceased from a bullet wound. The same, tragically, was true of the two boys. Greg and Ben had both been shot, apparently while they slept. Nick Browning had chosen a fortuitous night for a sleepover. He was the sole survivor of a massacre.

For someone who had just lost his entire family to a terrible tragedy, Nick Browning was remarkably calm as he answered police questions. He also offered his theory of what might have happened. He believed that someone had broken in to rob the place and had ended up executing the family instead.

Only, that didn’t make sense. Nothing had been taken from the house and the family had been killed in their beds. None of them had offered resistance so why would a burglar go through the house, shooting them one by one and then leave without taking anything? It did not take genius-level detective work to figure out that robbery was not the motive here. This was personal. That made 15-year-old Nick Browning the prime suspect.

And so, the police continued to probe and press, interrogating Browning well into the night. During that time, the teenager made several contradictory and potentially incriminating statements. Eventually, at 1:05 a.m. Sunday morning, he cracked and admitted the murders. According to Browning, he’d left his friend’s house at nine and had walked the approximately two miles back to his family home. His parents and brothers had retired early that night, in preparation for their trip the next day. Browning had snuck into the house under cover of darkness. He’d retrieved one of his father’s handguns and carried it to the living room, where his father lay asleep on the couch. John Browning had died first before the killer proceeded upstairs to systematically wipe out his mother and brothers. He then left the house, tossed the gun into some bushes (it would later be found there by police), and returned to his friend’s house to establish an alibi. Browning could offer no motive for the killings, other than to say that he and his father “hadn’t been getting along.” It was later, after talking to his friends, that detectives learned of the possible financial motive.

Arrested and charged with four counts of first-degree murder, Nicholas Browning was taken to the Baltimore County Detention Center in Towson, Maryland. He’d spend his sixteenth birthday here. On the same day, some 1,300 people attended a funeral service for his family at the Trinity Assembly of God in Lutherville. But despite the atrocity he’d committed, the juvenile killer still had his supporters, including his maternal grandparents, whose daughter’s life he’d so callously snuffed out. After the somber events of the funeral, the family issued a statement. “Our concern and love goes out to Nick,” it said. “Whatever else lies ahead, he is a member of our family, and he will have our support.”

They were not the only ones willing to fight Browning’s corner. As the trial date edged closer, Browning’s lawyers offered a hint of the defense they were planning. They were falling back on the botched robbery theory, suggesting that Nick was so traumatized by the murders of his family that he had given a false confession. This rather farfetched explanation was very unlikely to have succeeded with a jury. But perhaps his defense team already knew that. Perhaps, they were just angling for a deal. If that was the case, they succeeded.

In January 2009, Nicholas Browning reached an agreement with prosecutors and entered guilty pleas to four counts of first-degree murder, accepting four life terms. In exchange, the state agreed to parole eligibility and allowed two of the life terms to be served consecutively. This means that Browning will qualify for early release in 23 years. With good behavior, he could be a free man by 2031. Nicholas Browning is currently incarcerated at North Branch Correctional Institution in Cumberland.