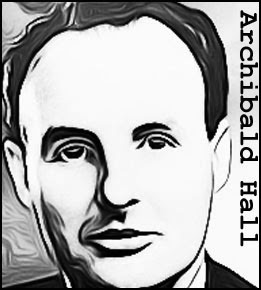 
Known as “The Monster Butler,” Archibald Hall was a career criminal who committed five murders, including those of his aristocratic employers. Hall began stealing at the age of 15, progressing to burglary and fraud. While serving a prison term, he studied etiquette and took elocution lessons. On his release in 1975, he began working as butler to Lady Margaret Hudson, a elderly lady who lived at Kirtleton House, Dumfriesshire. Hall initially planned on robbing his employer, but found that he was genuinely fond of her. When another employer, David Wright, stole from Lady Hudson, Hall decided to exact revenge. He took Wright on a rabbit hunt and shot him in the back of the head.

After the murder, Hall quit his job and returned to London where found work as a butler to 82-year-old Walter Scott-Elliot, and his 60-year-old wife Dorothy. Hall's plan was to rob his new employers, but when Mrs Scott-Elliot caught him casing the house with an accomplice, Michael Kitto, he put his hand over her mouth and suffocated her.

Hall and Kitto then drugged Walter Scott-Elliot and drove him to Scotland, helped by Mary Coggles, a prostitute. Mrs Scott-Elliot was buried in Braco, Perthshire. Her frail husband was beaten to death and buried in the woods near Tomich, Invernesshire.

Hall’s next victim was Mary Coggles, who had taken to wearing Mrs Scott-Elliot's expensive clothes and jewellery and was drawing attention to herself. Her body was found in a barn in Middlebie, Dumfriesshire on Christmas Day 1977.

The final victim was Hall's hated half-brother Donald, a pedophile who had just been released from prison. Hall invited him to his home in Cumbia, chloroformed him and then drowned him in the bathtub. Afterwards, Hall and Kitto headed back to Scotland, with Donald’s body in the trunk of their car. They planned on burying him in the wilderness, but bad weather forced them to stop the night at a hotel. There, the hotel manager became suspicious of their behavior and called the police. A search of their car turned up Donald’s corpse.

It didn’t take long for the police to link Hall and Kitto to the other murders. Tried on four counts, they were both sentenced to life imprisonment. While incarcerated Hall made several unsuccessful attempts to take his own life. He died eventually at Kingston Prison, Portsmouth, on September 16, 2002, aged 78.