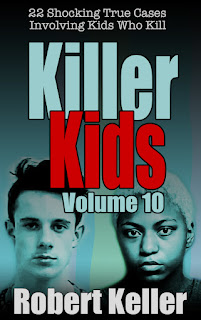 Ruby Thomas: A man is beaten to death in broad daylight at one of London’s most popular tourist attractions. His killer? A teenaged beautician.

Christian Romero: Two men are shot to death at a suburban home. But who killed them? Surely it couldn’t be the householder’s 8-year-old son.

Ashleigh Dye: A mother and daughter at odds over the girl’s choice of boyfriend; a conflict about to escalate into violence. One of them won’t survive.

Katrina Sarkissian: A petty squabble at a house party escalates into a confrontation between teenaged girls. Both of them will end up dead.

Ove Andersson: A cowboy-obsessed teen is ejected from a school dance. A short time later, he returns…with a gun.

Darren Huenemann: Darren was in a hurry for his inheritance. Perhaps a pair of teenaged assassins can speed the process along.
Plus 14 more riveting true crime cases. Click here to get your copy now

Andrew Conley had been thinking about murder for some time. He’d seen it done on his favorite TV show, Dexter, noting that it looked easy and exciting, even glamorous. He’d fantasized about it since he was in the eighth grade, running through various scenarios in his mind. He’d even come close to following through. One night in November 2009, while the rest of the household was asleep, Andrew had gone to the kitchen and selected a large knife. He’d carried the blade upstairs and snuck into his parent’s bedroom. Standing there in the dark, watching their sleeping forms while his heart pounded in his chest, he’d willed himself to action. His plan had been to slit his father’s throat but when it came down to it, he couldn’t follow through. Eventually, he slunk away, berating himself for being a coward

But still, the urge persisted, a drive that 17-year-old Andrew would later compare to a hungry person craving a hamburger. To the outside world, he was a normal, well-adjusted kid who did well at school and had never been in any serious trouble. On the inside, though, Andrew Conley was in turmoil. That turmoil eventually reached its boiling point on the night of November 28, 2009.

Bridget Conley and her husband, Shawn, both had to work that evening, pulling a shift at a riverboat casino in their hometown of Rising Sun, Indiana. That meant that Andrew would have to babysit his 10-year-old brother, Conner, the usual arrangement in these circumstances. Andrew wasn’t too happy about it. He had plans with his girlfriend that night. Still, he made no complaint. He and Conner bade their parents goodbye. Shawn and Bridget were barely out of sight when Andrew told Conner to get his stuff. He was taking him to their grandmother’s house.

Unfortunately for Andrew, their grandmother wasn’t in when they got there, meaning that he’d have to bring his brother back home. It also meant that he’d have to cancel his plans with his girlfriend. Whether or not it is this which sparked the tragic incident that was to follow, is unknown. What we do know is that the brothers got into a wrestling match that started as a game and quickly turned serious. Andrew Conley was a slightly built teenager, but he was seven years older than his brother and stronger than him. He quickly got the upper hand, trapping Conner in a headlock. “Andrew, stop,” the little boy gasped as the pressure was increased. But Andrew wasn’t stopping. He kept squeezing and squeezing until Conner went limp and lost consciousness.

At this stage, it would still have been possible for Andrew to back out, to lay his brother out on the couch, to perhaps spray some water on his face until he came to. But Andrew had been fantasizing about murder for so long that backing out wasn’t an option. It was as though he was in the grip of some homicidal fugue. Grabbing Conner by the ankles, he dragged him into the kitchen and laid him out on the tile. Then he rummaged through some drawers until he found a pair of latex gloves. These he donned before putting his hands on his brother’s throat and applying pressure. He would continue throttling the child for a full 20 minutes, until blood started dripping from Conner’s mouth and nose.

Was Conner dead? Andrew kneeled over the body and pressed an ear to his brother’s chest. No trace of a heartbeat. He tried for a pulse. Nothing. Certain now that his brother was gone, Andrew got to work covering up the crime. First, he fetched a plastic bag from a kitchen drawer and pulled it over Connor’s head, securing it in place with black electrical tape. Then he dragged his brother, again by the feet, down into the garage, banging his head on every one of the basement steps. For good measure, he also slammed Conner’s head several times against the concrete floor of the garage, just to be sure that the child really was dead. Finally, he loaded the little boy’s corpse into the trunk of his car. Then he went back inside, washed up, and changed his clothes. He had a date to keep.

Andrew would spend several hours at his girlfriend’s house that evening, watching a movie and hanging out. He also presented the girl with a friendship ring. He left at around 11 p.m., driving to Rising Sun City Park, near the elementary school where his brother attended fifth grade. There, the boy’s corpse was unceremoniously dumped in a wooded area, covered over with leaves and twigs. Having done that, Andrew drove home and went to bed.

Shawn and Bridget Conley did not realize that Conner was not in the house until late the next morning. Andrew offered an easy explanation for this. He said that he’d dropped Conner at their grandmother’s house. Since this was a fairly common arrangement, the Conleys thought nothing of it. Shawn did, however, tell Andrew to drive over and pick Conner up.

But, of course, that was never going to happen. Conner was dead and Andrew had killed him, and the deed could not be undone. When Andrew left the family home for the last time that afternoon, it was not to fetch Conner but to visit friends. They were the first to hear the story of how he’d murdered his brother. Later that day, Andrew would drive to the Rising Sun Police Department and tell the story again, this time to stunned police officers. Conner’s body was recovered that same evening and Andrew was charged with murder.

Since there was never any doubt as to who had killed Conner Conley, the thrust of the legal arguments was to establish competence. Andrew’s defense attorney insisted that his client was mentally impaired and pointed to the sexual abuse he’d suffered as a child and to his habit of inflicting self-harm. The prosecution was equally convinced that Andrew was of sound mind and that he presented a danger to the community. Andrew Conley settled the argument himself by going against the advice of counsel and pleading guilty to first-degree murder. He said that he wanted to be put to death but since his age excluded him from the possibility of execution, the judge did the next best thing. He sentenced Conley to life in prison with no possibility of parole.