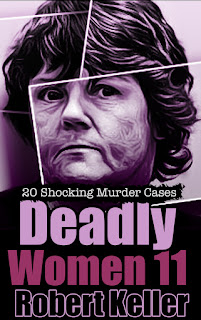 Sarah Gonzales-McLinn: Hal was 50, his teenaged lover, Sarah, was 17. She was also a dangerous psychopath, eager to find out what it was like to kill someone.

Vickie Frost: When Rick met Vickie at a sales conference, it was love at first sight. No one told him that she was a control freak…or that she had a temper.

Morgan Smith: Theirs was a slave/master relationship and Morgan liked it that way. When Daryl cut her loose, it broke her. Now she’s back…carrying a shotgun.

Donna Roberts: Donna was a middle-aged, suburban matron until she suffered a head injury in an auto wreck. Now she’s picked up some bad habits.

Camellia Brown: The office gossip was that Camellia was mentally unstable but Earl didn’t listen to gossip. Perhaps, in this case, he should have.

Kerry Bauer & Emma Last: A trio of miscreants lure a young acquaintance out into the English countryside. What happens next is pure evil.

Misook Nowlin: Cross-cultural relationships can be problematic, more so when the one you love turns out to be a sociopath. 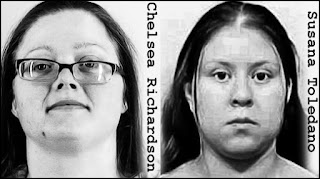 Andrew Wamsley and Chelsea Richardson came from opposite sides of the tracks. Whereas Andrew lived with his parents in a luxury two-story home in affluent Mansfield, Texas, Chelsea was more downscale, occupying a double-wide trailer with her widowed mom in blue-collar Everman. The pair might never have met but for Andrew’s interest in a card-based game called Yu-Gi-Oh, an interest he shared with Chelsea’s older brother. Players would meet up at an IHOP restaurant in South Arlington and spend hours pitting themselves against each other. One day, Chelsea tagged along and she and Andrew were introduced.

It is difficult to understand what Andrew saw in the homely, overweight Chelsea, at that time a 19-year-old senior at Joe C. Bean High School. Perhaps it was her outgoing personality. As a family friend once remarked, “Chelsea could strike up a conversation with the devil himself.” In any case, the couple started dating and that was when the problems started. Andrew’s parents, Rick and Suzanna, did not like his pushy new girlfriend. Chelsea, in turn, developed an animosity towards them for what she felt was interference in her relationship with their son. She soon got to work on Andrew, turning him against his parents by suggesting that they did not really love him and preferred his older sister, Sarah.

Andrew Wamsley appears to have been a weak-willed and impressionable young man. He was certainly no match for the dominant, forceful Chelsea. When she suggested that his parents might disinherit him in favor of his sister, he believed her. When she started talking about killing them and his sister, and then claiming the $1.5 million estate for himself, he was ready to listen. By October 2003, ten months after they’d started dating, they were talking seriously about murder.

By now, Chelsea had taken over complete control of the arrangements, recruiting two more players into the plot. The first of those was 24-year-old Hilario Cardenas, the manager of the IHOP they frequented. He was tasked with sourcing a gun for them and agreed to do so. The other recruit was even more important to the plan. She was 19-year-old Susana Toledano, a young woman who seems to have been entirely under the control of Chelsea Richardson. Chelsea and Susana were high school classmates but their relationship ran deeper than that. When Susana’s mom threw her out of the house, Chelsea persuaded her own mother to take the girl in. And she never let her friend forget this act of charity. Susana was beholden to her and willing to do whatever she wanted. In this case, Chelsea wanted her to play the role of assassin.

The first attempt on the lives of the Wamsleys was straight out of a bad, made-for-TV, movie. On the afternoon of November 9, 2003, Andrew and Susana tracked the family’s Jeep Laredo as it made its way along the I-35 near Burleson. Andrew was at the wheel, Susana in the rear passenger seat, clutching the 9 mm handgun that Hilario Cardenas had obtained for them. The conspirators had spent the previous week practice firing the weapon. Susana was confident that she would find her mark. As Andrew sped past, she leaned out of the window and unleashed a volley of rounds at the gas tank. In their fertile imaginations, they had imagined that the car would go up in a ball of flame, killing everyone on board. That didn’t happen, of course. The family was shaken but unhurt. They reported the incident to the police but an investigation into the matter went nowhere.

With the failure of their initial plan, the conspirators got together and determined on a more reliable method of assassination. They decided that they were going to break into the Wamsley home and gun down the family, making it look like a burglary gone wrong. Susana was again browbeaten into doing the actual killing but on the first attempt she lost her nerve and the plan had to be abandoned. Chelsea would spend the next week alternately berating and cajoling her friend before Susana was ready to go again.

On December 9, 2003, Susana received a text message from Chelsea, telling her that it was time. Later that night, Andrew and Chelsea collected Susana and the trio drove towards the Wamsley residence. The house had a state-of-the-art security system but even the most sophisticated system is useless when a killer has both the keys to the front door and the alarm codes. Tiptoeing into the house in the early morning hours, Andrew, Chelsea, and Susana found Mrs. Wamsley asleep on a couch in the living room. A nod from Chelsea and Susana walked up, held the gun inches from her victim’s temple and pulled the trigger, killing her instantly.

Now subterfuge had to be abandoned in favor of speed. Rick Wamsley might have been awakened by the gunshot. Guided by Andrew, Susana jogged up the stairs and headed for the master bedroom. She’d just opened the door when Rick charged her. At 46, Rick was still in excellent shape, a powerfully-built six-footer. Susana had to react immediately and she did, firing off a shot that hit her intended victim just above the left eyebrow. But still, Rick came at her, grappling for the weapon and knocking it from her grasp. As the two of them wrestled on the floor, Chelsea picked up the gun and fired at Rick, hitting him several times. Now Andrew entered the fray, trying to pull his father off Susana. Despite being seriously injured, Rick was still fighting for his life. The plan was going horribly wrong.

It was at this point that Chelsea turned and sprinted downstairs, returning moments later with two large knives that she had retrieved from the kitchen. One of these, she handed to Susana, instructing her to go downstairs and make sure that Suzanna was dead. Meanwhile, Rick continued to fight, even as his strength was ebbing away. “Why?” he asked of his son. “Why are you doing this?” In response, Chelsea told him to shut up. When Susana returned from the living room, minutes later, she found Rick lying face down in the hallway. Chelsea told her to stab him in the back. Susana, as always, did as she was told.

It is fortunate that Sarah Wamsley was not at the family home that night or she too would undoubtedly have been slain. As it was, two people had been brutally murdered. Their work done, the killers left the scene, stopped off to discard their bloody outer clothing in various dumpsters, and then went to Chelsea’s house to clean up. The following day, Andrew took his car to a local carwash for a full clean and detail. Meanwhile, Chelsea and Susana went to school as usual and Susana went to her part-time job thereafter.

At around 11:40 p.m. on the night of December 10, a 911 call was registered from the Wamsley residence. The caller immediately hung up the phone but since all logged calls must be responded to, a patrol car was dispatched to check it out. When Mansfield patrol officers arrived a few minutes later, they found the house in darkness and no one responding when they knocked. However, the garage door was open and so too was the door from the garage into the residence. That was how the officers gained entry. Inside they found a bloodbath. Suzanna Wamsley lying on the couch, shot in the head and also stabbed thirteen times in the chest; Rick Wamsley in the upstairs hallway in a pool of his own blood. Rick had put up a brave fight but had been overcome by an accumulation of bullet and stab wounds. In his hand, he clutched a vital clue, a clump of dark hair.

Although the plan had been to make the murders look like a botched robbery, the three conspirators had apparently forgotten to take anything of value from the premises. That led the police to conclude that the Wamsleys had been killed for some personal motive. This, naturally, made Andrew a potential suspect. But Andrew denied involvement and produced an alibi. He and Chelsea had been with a friend, 19-year-old Jeremy Lavender. Lavender, who was mentally challenged, confirmed this, although he contradicted himself several times under questioning, heightening police suspicions. It would later emerge that Chelsea Richardson had convinced Lavender into covering for her by cozying up to him and convincing him that she was his girlfriend.

For now, Andrew and Chelsea were off the hook. But the police still had one vital clue to work with, the hair that had been found clasped in Rick Wamsley’s dead hand. DNA testing would link that sample to Chelsea’s close friend, Susana Toledano. On April 5, 2004, Susana was taken in to custody. Almost immediately, she admitted to the killings, implicating Hilario Cardenas but failing to mention her other accomplices. Even with her life at stake, she was still beholden to her friend. Hilario, however, had no such loyalty. He soon implicated Andrew and Chelsea, leading to their arrests later that same day.

Chelsea Richardson, unsurprisingly, denied any involvement in the murder. Even staring down the barrel of a gun, she believed that she could somehow talk her way out of trouble. While in jail awaiting trial, she got to work on her fellow inmates, trying to get them to testify on her behalf. She even wrote out statements that she asked them to memorize in order to provide her with an alibi for the time of the murder. But these were not the naïve schoolgirls that she was used to manipulating. Several of the women would turn against her and testify for the prosecution at her trial.

And so, too, would Susana Toledano. Facing a possible death sentence, Toledano finally agreed to reveal the details of the murder plot and to talk, in particular, about Chelsea’s pivotal role. Her testimony left no doubt that Chelsea was the mastermind behind the whole thing. It took the jury just two hours to decide that she was guilty and to recommend the death penalty. In 2012, that sentence was reduced on appeal to life in prison. Richardson must serve at least 40 years before she is eligible for parole.

As for the other players, Susana accepted a life term with parole in 30 years, while Hilario Cardenas pled guilty to conspiracy and was sentenced to 50 years behind bars. Andrew Wamsley got life and will be eligible for parole in 2044.

One interesting detail to come out of Andrew’s trial was that it was he who had made the mysterious 911 call on the day after the murders. He had been eager for his parents’ bodies to be found. The young man had naively believed that he would come into their money as soon as they were declared dead.