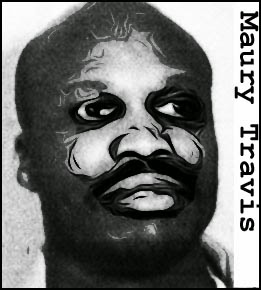 
There was very little in Maury Travis’ background that suggested the killer he would become. A quiet boy growing up, Travis did well in school and was a regular churchgoer. He appeared to take his parents’ divorce in his stride and eventually graduated and attended college.

But it was at college that he discovered cocaine and the pursuit of that drug led him into criminal behavior. Arrested on five counts of armed robbery in 1994, Travis served five years at Farmington Correctional Center. He was returned to prison in February 1998 for a drug—related parole violation, serving a year. Not long after his release, he killed his first victim, 61-year-old Mary Shields.

On November 29, 2000, Travis was again found in possession of drugs and sent back to prison. He was free again in March 2001. Shortly after, the bodies of strangled women started showing up in and around Ferguson, Missouri, all of them bearing evidence of torture.

Travis was a remarkably prolific killer, claiming 10 victims in less than a year, but while the police had him on their suspect list, there was no direct evidence linking him to the murders. That is, until Travis got too clever for his own good.

On May 21, 2002, the police received a letter, including a map that gave the location of his latest victim. The body was indeed where Travis said it would be, but investigators focused their attention on the map. As it had been downloaded from the Internet, the police could track the IP address. That address belonged to Maury Travis.

Travis was arrested on June 7. At his home, police found an extensive collection of video tapes, documenting the rape, torture and murder of several of his victims. Travis, however, would never stand trial for his crimes. He hanged himself in his cell on June 10, 2002.