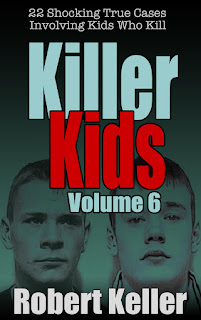 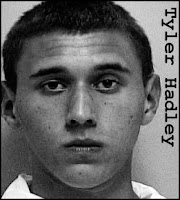 It was the most raucous party of the year, hosted by a kid who no one at Port St. Lucie High School would have given a second glance on any other day. Tyler Hadley was a weirdo. Standing six-foot-one and weighing just 160 pounds, he looked like a walking cadaver. He was also withdrawn, often non-verbal, although prone to furious outbursts over any affront, real or imagined. Aside from that, Tyler was a juvenile delinquent who had a record for aggravated battery and for burglary. He’d recently got off with a warning after deliberately setting a massive brushfire. He was also a pothead and a pill popper. In short, Tyler Hadley was not the kind of kid who most other kids wanted to hang around with.

So why was Tyler’s party so popular? It was because Port St. Lucie, 40 miles up the coast from West Palm Beach, Florida, was so incredibly boring for kids. The city had been incorporated in the early 1960s as a cut-rate retirement community. Fifty years later, it was home to 160,000 inhabitants, many of them retirees, but a substantial proportion made up of teens and young adults. Since this demographic had never been part of the town planner’s vision, there was nothing for them to do for entertainment. No clubs, no bars, not even a proper shopping mall.

Tyler Hadley’s Facebook announcement that his parents were out of town and that he was throwing a house party was therefore greeted with much enthusiasm. By 11 p.m. on Saturday, July 16, 2011, upwards of 100 kids had descended on the modernist duplex on Granduer Street. (Many of Port St. Lucie’s street names are hilariously misspelled.)

The party at the Hadley residence quickly got out of hand. Kids were drinking beer, smoking marijuana, jumping on couches, raiding the refrigerator for food, entering every room in the house except the locked master bedroom. Clothing and other personal items were being pulled from drawers and closets, drinks were being spilled, glasses and bottles smashed, cigarettes put out on furniture, pictures ripped from their frames, all of this to a soundtrack of ear-splitting hip hop spilling from the stereo. Tyler had originally asked his guests not to smoke in the house, but now they were causing such a ruckus on the front lawn that he ushered them indoors for fear that one of his neighbors would call the police. One kid came in dragging a mailbox that he’d stolen from an adjacent lawn. Soon Tyler had abandoned all efforts to maintain order. When a late arrival asked him about the house rules, he replied: “Just do whatever you want.”

In the midst of all of this chaos, Tyler was becoming increasingly withdrawn, standing against a wall and watching impassively as his guests destroyed his parents’ home. Eventually, at around 1 a.m., he called his friend Michael Mandell aside and asked if they could talk privately. Michael had been Tyler’s best friend since they were eight years old so, of course, he said yes. He accompanied Tyler to the end of the block, the two of them walking in total silence. It was there that Tyler turned to his friend and made a startling revelation.

“You know how I said that my parents were out of town?” he enquired.

“Well, I lied. My parents are in the house.”

“What do you mean?” Michael asked, puzzled.

“I killed them,” Tyler said in a monotone.

Anyone else, hearing such a confession, would have been stunned. But Michael had heard it all before. Tyler had spoken often about killing his parents. His words meant nothing. Usually, he was just blowing off steam after one of their frequent spats. Still, Tyler had spoken the words, saying them almost as if he expected Michael to challenge him. And Michael didn’t let him down. “Show me,” he said.

Michael Mandell would later have cause to regret his bravado. Re-entering the house, he and Tyler waded their way through the crowd of cavorting teenagers and headed upstairs. There, Tyler produced a key and opened the master bedroom. The boys entered and Tyler closed the door behind them. Looking around the room, Michael immediately saw a pile of rubble that included broken glass, pillow cases, a sponge mop, an overturned coffee table, a pile of bloody towels. A pale leg protruded from under this mess. Michael took in a sharp intake of breath. “You did this?” he asked, to which Tyler just nodded. He then proceeded to tell his friend what had happened.

According to Tyler, the war at home had been escalating of late. His parents were too strict, too controlling. Recently, his mom had confiscated his phone over some or other infraction. His most serious gripe, however, was that his parents had admitted him to the New Horizons mental health clinic, to attend daily counseling after the arson incident. That was when he’d decided to kill them.

The attack on his parents had happened just after 5 p.m. that afternoon. Tyler had been in his room, listening to rap and popping ecstasy pills to psych himself up. He’d then walked down to the garage, where he’d fetched a claw hammer. Then he returned to the house and stood behind his mother, Mary Jo, as she sat working on her computer. For a full five minutes, he stood there, working up the courage to act. Finally, he lifted the hammer and brought it crashing down on the back of his mother’s head. Mary Jo had started screaming. “Why?” she repeated over and over again as Tyler continued to beat her. Then Blake Hadley came rushing into the room, responding to his wife’s screams. Blake was a big man, a six-footer weighing in at over 300 pounds. But Tyler had the element of surprise. A swing of the hammer left Blake stunned. Then, as he collapsed to the floor, Tyler closed in and bludgeoned him to death with a flurry of blows.

When it was over, Tyler said, he wrapped towels around his parents’ heads and dragged them into the master bedroom. There, he laid them out side by side, face down on the floor, the hammer arranged between them. Then he started cleaning up the scene, a mammoth task which took him over three hours to complete. All of the incriminating evidence – broken glass, blood-soaked towels, the shattered coffee table and other items – were tossed into the bedroom with the bodies. Finally, Tyler got into the shower to wash his parents’ blood from his hands, face, and hair. Having done that, he dressed in clean clothes and then logged on to Facebook and announced to the world that he was throwing a party.

That party was now on the wane. At around 2 a.m., a rumor started up that there was a get-together at another house and there was a mass exodus. The commotion caused by the departure, with revving engines and blaring music, was finally too much for Tyler’s neighbor, Raeann Wallace. She got on the phone and called the police. Minutes later, a couple of Port St. Lucie police officers showed up. By then, there were just 20 teens left at the Hadley residence, and with assurances given that the noise would be kept down, the officers departed.

But no sooner had they left than the revelers started to return. The rumor of the other party had turned out to be false. Soon the noise was cranked up again, although not to previous levels. By 4:40, when the cops again came calling, the festivities were still in full flow. This time, however, the police were there on a far more serious matter. After leaving the party, Michael Mandell had placed a call to the Crime Stoppers hotline. He’d told them everything.

Tyler Hadley was arrested and charged with the murders of his parents, Blake and Mary Jo. Although just 17 at the time, he was tried as an adult, found guilty and sentenced to life in prison without parole. That sentence was subsequently overturned on appeal, with the non-parole stipulation rescinded. Given his age and his apparent remorse for the murders, it is conceivable that Hadley will be released one day, although it is unlikely to happen any time soon. The house on Granduer Street, where the murders occurred, was demolished in April 2015.