The lives and dreadful deeds of 22 horrific medical serial killers, including; 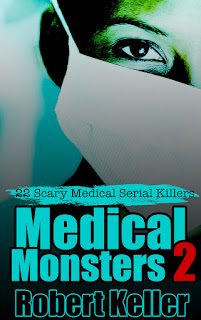 Anthony Joyner: A truly depraved individual who preyed on the elderly women at the nursing home where he worked, raping and suffocating his victims.

Daniela Poggiali: This Italian nurse murdered the patients under her care, then posed for selfies with their corpses.

The Skin Hunters: This Polish ambulance crew had less interest in saving its victims and more in earning a bounty on their corpses.

Linda Hazzard: An alternate healer who believed that fasting was the cure-all for disease, Hazzard starved as many as 40 of her patients to death.

John Bodkin Adams: A humble GP who became the wealthiest doctor in Britain, thanks to bequests from over 130 of his patients, many of whom died under suspicious circumstances.

Roland E. Clark: Abortionist, rapist, child molester, drug dealer, murderer, Dr. Clark must surely rank as one of the most malevolent individuals to ever earn a medical degree.

Robert Diaz: Self-proclaimed psychic who claimed that he could predict the day and hour of his patients’ deaths. He was never wrong.

William & Lila Young: A truly heartless Canadian couple who turned baby farming into an industry. Responsible for the deaths of as many as 600 infants.

Joan Vila Dilme: Vila claimed that his murders were “mercy killings” but the method he employed ensured that his victims died in excruciating agony.

The Kearsley Home, at Christ Church Hospital in Philadelphia, is the oldest nursing home in the United States. Established in 1762, this specialist facility caters to some 60 elderly ladies, each of whom is accommodated in her own apartment. It is an extremely well-run facility, staffed by competent and caring personnel. It is hardly the sort of place where you would expect to find a serial killer. And yet, in the first half of 1983, just such a creature stalked the hallowed halls, leaving a trail of death in his wake. By the time he was caught, six frail women, ranging in age from 83 to 92, would be dead, brutally raped and suffocated in their beds.

The first sign of anything amiss came on January 21, 1983. At 92 years of age, Margaret Eckard was the oldest resident at the home. Yet despite her advanced years, she was an active and alert individual, much loved by everyone because of her sunny personality. It was somewhat of a surprise then, when she failed to show up for breakfast on that Friday morning.

A nurse was dispatched to Mrs. Eckard’s room and found her lying unmoving on her bed. She immediately called for a doctor, who confirmed that Mrs. Eckard was dead. A subsequent examination revealed some worrying signs, including a bruise to the dead woman's face and blood in her mouth and nose. There were also streaks of blood in the vagina. Despite these findings, the doctor concluded that Mrs. Eckard had died of natural causes and attributed her death to a heart attack. It was a mistake that would have tragic consequences for five other residents of the home.

Three weeks after Margaret Eckard's death, there was another at Kearsley. Like the previous victim, 85-year-old Katherine Maxwell was first flagged as missing when she failed to join her companions at breakfast. A nurse was sent to check on her and found her lifeless body lying on her bed. Blood was again noticed around the genital area, this time seeping out to stain the dead woman’s pajamas. This, however, was attributed to natural causes.

March 27, 1983, was the 86th birthday of Elizabeth Monroe, another resident at the home. She had spent the day with friends, eating cake and visiting late into the evening. The following morning a nurse found her dead in her apartment, with inexplicable traces of blood on the body.

This time, the doctor who did the initial examination was concerned about the presence of blood. But the Philadelphia medical examiner dragged his feet about initiating an investigation. By the time things got rolling, Elizabeth Monroe's body had already been embalmed, destroying any evidence. The death was recorded as natural.

Eighty-nine-year-old Lillie Amlie was one of the Kearsley Home’s most outgoing residents. The octogenarian was still socially active and even had a boyfriend who visited her regularly from another residential home. On June 1, Lillie was found immersed in a few inches of water in her bathtub, dressed only in a pair of stockings. There was a quantity of blood in the water but it was theorized that she had suffered a heart attack while preparing her bath and had fallen in. The investigation went no further than that.

A little over a month later, on July 5, 75-year-old Abbie Mortimer was found dead in her apartment. Her private physician was summoned immediately and carried out a postmortem examination but had no reason to suspect anything other than a natural death.

Then, on July 19, there was a double tragedy at the nursing home. Ninety-year-old Eugenia Borda had only been living at Kearsley for a month when she was found dead in her apartment. Blood was noted around her nose, mouth and vagina and this time, the examining physician refused to sign the death certificate, certain that Mrs. Borda had been the victim of foul play.

Those suspicions were firmed up just a few hours later when another elderly resident of the Kearsley Home was found dead. Seventy-two-year-old Mildred Alston lived right across the hall from Eugenia Borda. She was found lying on her bed, her panties discarded beside the body, suggesting that she might have been raped.

That bit of evidence forced the medical examiner into action. Seventy-two hours later, the M. E.'s office delivered its verdict. Eugenia Borda had died of strangulation while Mildred Alston had suffocated to death. Alston, it emerged, had also been robbed. Her diamond ring, wedding band, and purse were missing from her room.

Detectives assigned to investigate the two apparent murders soon learned of the five strikingly similar deaths that had occurred at the Kearsley Home. They quickly realized that they were dealing with a serial killer, one who raped and murdered elderly ladies. From there, it wasn’t too difficult to figure out that the killer must be a member of staff at the home. A stranger wandering the halls would have been noticed immediately.

All 40 employees of the home were questioned but there were none who immediately aroused suspicion, certainly not Anthony Joyner, a 22-year-old assistant diet technician, who everyone at the home appeared to like. But then investigators got a tip-off from one of Joyner’s friends. It appeared Joyner had been shooting his mouth off about a rape he’d committed on a 68-year-old woman who lived in his neighborhood. Detectives did some checking and sure enough, they found an unsolved rape that tallied with the tip-off. Joyner was immediately arrested and brought in for questioning.

Initially, the slightly built Joyner denied any involvement in the rape or any of the murders, but under intense questioning, he eventually cracked and blurted out, “Okay, okay, I killed them all.” He then went on to relate how he had carried out the murders.

According to Joyner, all of the murders had been committed on nights when he had gotten into arguments with his girlfriend. Angry and frustrated, he had gone out drinking and from there had made his way back to the Kearsley Home where he’d entered through a cellar window. He’d then begun wandering the halls, not following a deliberate path but looking for unlocked doors. When he found one, he entered.

Finding the occupant asleep, Joyner had subdued her with a pillow over the face, suffocating her into unconsciousness. He had then raped the victim before finishing her off again with the pillow or a makeshift garrote. All of the victims, with the exception of Lillie Amlie, had been chosen at random. Mrs. Amlie, however, had been deliberately marked out for rape and murder after she reported Joyner for theft.

This was the confession that Anthony Joyner signed off on. But the ink was barely dry when he recanted, saying that he had been coerced. Despite these denials, he was charged with seven counts of murder, rape, theft, and other related offenses.

Anthony Joyner went to trial in May 1984 and was found guilty of five counts of murder and one of manslaughter. Given the heinous nature of the crimes, the prosecution argued hard for the death penalty. However, in order for that sentence to be passed, the jurors have to be unanimous in their decision during the penalty phase and, in this case, they weren’t.

And so Anthony Joyner, one of the most depraved killers in Pennsylvania history, was spared the electric chair. On May 5, 1984, Judge Edwin Malmud sentenced him to life in prison. It is highly unlikely that he will ever be released.

Don’t have a Kindle? No problem. Download Amazon’s free Kindle reader here for PC or Mac
Posted by Robert Keller at 23:04